‘...make the most out of any bad situation’ 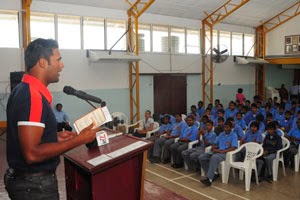 Story Created: Mar 7, 2012 at 8:57 PM ECT
“DO not take the simple things in life for granted, and don’t wait for a life-changing moment to lift your intensity.”

Former captain of the T&T cricket team Daren Ganga imparted these words of advice yesterday to a crowd of enthusiastic pupils at Hillview College, Tunapuna.

The event was a collaborative effort by Hillview College and the non-governmental organisation Random Acts of Good Deeds. Ganga made a guest appearance at the school to celebrate World Read Aloud Day 2012.

The school’s auditorium came to life as pupils erupted in cheers, whistles and applause while Ganga took the stage. As he later attempted to exit the auditorium, he was mobbed by a group of pupils who bolted towards the cricketer, pen and paper in hand.

“This is a day that highlights awareness of literacy as a right that belongs to all people. By raising our voices together on this day, we show the world’s children that we support their future and their universal right to read,” the school’s principal, Leslie Mahase, said.
Ganga arrived after midday and read aloud a chapter from the NY Times best seller Tuesdays with Morrie by Mitch Albom.

He gave a motivational speech afterwards, during which he also paid tribute to his former teammate Runako Morton, who died in a highway crash on Sunday night as he was headed to his Princes Town home. Ganga expressed sadness and shock over his colleague’s death. His last interaction with Morton was on Friday at the Queen’s Park Savannah in Port of Spain.

Ganga said one of the lessons he learned from reading Tuesdays with Morrie was the protagonist’s determination to make the most of his life in the face of adversity, and Ganga urged the young men in the audience to make the most out of any bad situation.

“Sometimes, it takes a negative or a tough situation to build character in ourselves. When you encounter negative situations in your life, it is very important for you to take the positives out of it,” said Ganga.

Ganga will travel to London, England, later this week where he will be graduating with his law degree. The 33-year-old said his ambition is to practise law, and he encouraged the pupils not to limit themselves and to balance schoolwork with extracurricular activities.
Posted by Trinbago at 8:28 AM No comments: